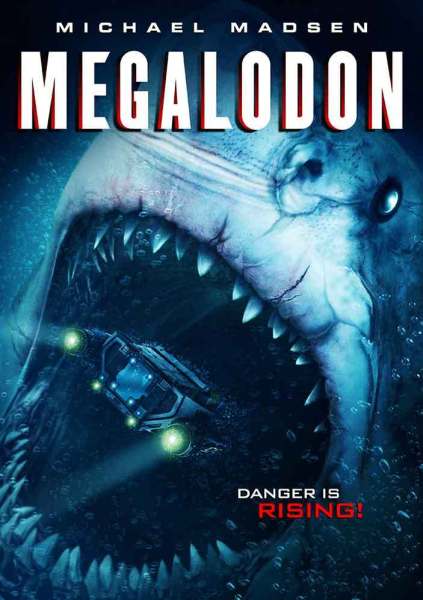 A military vessel on the search for an unidentified submersible finds themselves face to face with a giant shark, forced to use only what they have on board to defend themselves from the monstrous beast…

Produced by the Asylum (the same company behind the Sharknado franchise), Megalodon takes place out in the middle of the ocean. An American military vessel is searching for the remains of a mysterious submarine. In command of the mission is the tough and no-nonsense Captain Streeper (Dominic Pace). Second-in-command to Streeper is Commander Lynch (Caroline Harris), who is literally fearless. Observing is Streeper’s mentor, Admiral King and the fact that the Admiral is played by Michael Madsen is just one of the things that makes Megalodon one of the best Asylum films ever!

Anyway, the Americans eventually find the submarine, just to discover that it’s full of Russians! Ivanov (Dimitry Rozental) and Popov (Aimee Stolte) may claim that they were just doing scientific research on sharks and whales but both Streeper and Lynch know better.  And when the Russians claim that there submarine was attacked by a giant shark, everyone laughs at them.

Until, of course, the giant shark shows up….

But then there’s all the things that you don’t expect.  For instance, a good deal of the movie actually takes place inside of the shark as the crew of a diving bell try to figure out how to get back outside of it.  And then there’s the scenes of Streeper and the Russians debating global politics. And, as I previously stated, there’s Michael Madsen as Admiral King.  Madsen only has a few minutes of screen time but he makes the most of them. He delivers his lines with a self-mocking gravity, letting us know that he’s as in on the joke as we are. He even gets a scene where he gets to talk to the shark while smoking a cigar and you better believe that he totally knocks it out of the park.  A lot of people on Twitter pointed out that no admiral would have hair as long and unruly as Michael Madsen’s but they’re missing the point. Michael Madsen’s job isn’t to convince us that he’s a career Naval officer. In this film, Michael Madsen’s job is to be Michael Madsen and nobody does it better.

In the best tradition of The Asylum, Megalodon is a wonderfully self-aware movie. It’s cheerfully and unapologetically over-the-top.  The entire cast seems to be having a blast and they’re all a lot of fun to watch. Dominic Pace gets to deliver the Independence Day “We’ll Never Stop Fighting” speech towards the end of the film and he delivers it with just the right combination of sincerity and humour. Caroline Harris brings a lot of authority to the role of the determined Lynch and both Dimitry Rozental and Aimee Stolte are wonderfully arrogant and villainous as the Russians. And then there’s the shark, which is big and intimidating and who attacks boats and eats sailors with a panache all of its own.

Megalodon is pure entertainment and it all works wonderfully well. It gives us evil Russians, a giant shark, and Michael Madsen. How can you not enjoy that?

Lisa Marie Bowman, MOVIES & MANIA – A version of this review first appeared on Through the Shattered Lens

“Despite having a lot of rather enjoyable elements at times, the fact that it manages to undo a lot of those with it’s negative aspects is a little underwhelming. Give this one a shot if you’re a hardcore giant shark movie fanatic, while those looking for more continuous killer shark antics should heed caution.” Don’s World of Horror and Exploitation

“Frankly, this was a rather enjoyable and entertaining entry. One of the main areas working for it is the rather fun and somewhat unique storyline here that provides this one with some great action. The idea of the shark capturing the sub at the very beginning and swallowing them forcing the majority of the film to become a series of rescue attempts which provide this with plenty of exciting scenes from both sides of the situation.” Kannibal Corpse Grinder

This film should not be confused with the 2002 movie of the same name directed by Pat Corbitt.