Prepare. Perform. Move on. These four striking words mark the beginning of transcendent short film The Lost Sword. Written and directed by Andrés Gil, The Lost Sword follows a ruthless hitman Gareth (Tom Conlan) whose life revolves around his work, until one particular job thrusts him back into a haunting past he’s been desperately trying to escape.

Gareth essentially fits the bill of the classic “assassin” type characters in standard on-screen depictions. Visibly lacking all form of emotion or empathy, he carries out his first hit of the picture with a cold mechanical fluidity. Unblinking as the man he’s about to murder begs for his life, the hired gunman pulls the trigger with zero remorse.

The atypical part of this particular portrait of a hitman at large is not his addiction to his job – nothing revolutionary there – but rather how the stone-cold executioner unravels from an unapologetically dehumanized start to a redeeming yet resigned finish.

The emotional success of this character development should be primarily attributed to Gil’s directorial vision, with a deserving nod towards Conlan’s absorbing take on Gareth, our troubled killer-for-hire. Through tortured flashbacks are seen through the assassin’s eyes, which are peppered throughout the film, a faraway past where a young boy raised in a cult is revealed. He is forced to relive these memories when one of his assignments turns out to be Martin (Michael Turner), a connection of his from the very same cult, who also wears the same distinctive back tattoo; a sword adorned in a crown of roses. 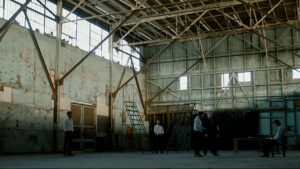 Though the meat of the story is gripping, Jonathan Chou’s camerawork steals the glory in this short. Chou identifies both contrast and texture in otherwise everyday images, albeit still loyal to the man on-screen. Through a series of silhouetted frames layered into sequences, he commands the viewer’s attention to the leading character. The imagery remains viscerally pleasing for the duration of the short, thanks to the cinematographer’s subtle emphasis of vivid hues sounding off against duskily rich backdrops.

Chou and Gil stylistically pair up well here, as they play off of a storytelling technique where the narrative is communicated mostly through implication. This is, of course, a testament to Conlan’s stupendous performance. The actor proves he has the convincing ability to meticulously express emotion sans many words. Seamless editing by Ramin Taheri is another disarming element of the production, as the pace of both sight and sound are lucidly melded together to match the swift burn of an intense storyline.

As the film relies on implication vs. narration, it’s left up to the viewer to piece together the series of events that leads to the protagonist’s decision to walk away from his long-time mantra; “finish the job or become the job.” A consequence of this is that the role of the supporting character who Gareth sacrifices his way of life for is not explicit. Nor is the assassin’s past clear. Based on newspaper clippings the hitman keeps, we can gather that as a child he was indoctrinated into a cult, and then we can assume he later escaped. 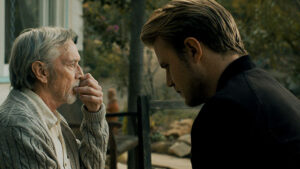 “…is a dark, exhilarating walk down an assassin’s tormented lane.“

But when the ex-cult member reminisces on the members of his former life, we behold him watching an old video reel where the very person he is meant to assassinate was interviewed about his disappearance. This leads to unanswered questions; was Gareth kidnapped into the cult or were his family members wrapped up in it, to begin with? When was the missing child announcement of his dated from – before or after his time in the group? What is his actual relationship with the target whom he belatedly saves?

Befuddlement aside, these untouched details do not detract from the irresistibility of this short. Even more impressive is that students made this nearly flawless production. Final year graduates at Chapman University’s Dodge College of Film and Media Arts are the visionaries behind this piece. Mark my words: Conlan, Chou, Gil, and Taheri are names you should seek out and familiarize yourself with. If The Lost Sword is any indication, these guys each individually demonstrate refined, natural-born filmmaking expertise, worthy of professional accolades.

At its heart, The Lost Sword is a dark, exhilarating walk down an assassin’s tormented lane. An unsettling but masterful exploration of humanity, this is one film you don’t want to skip out on. 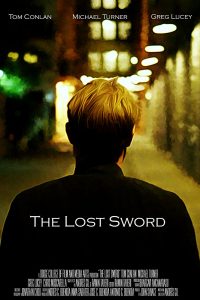